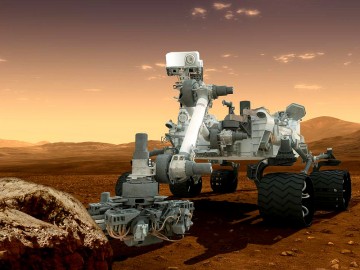 The software that guided the U.S. space agency’s Mars Science Laboratory to its bulls-eye landing on Mars was written by Wind River, an Intel subsidiary. The software operated the craft’s controls from its liftoff in November 2011, to its descent in a swirl of red dust at 10:21 p.m. (Pacific) Sunday. “Wind River’s VxWorks is the software platform that controls the execution of all of Curiosity’s functions -- from managing avionics to collecting science data and sending the experimental results back to NASA’s Jet Propulsion Laboratory on Earth using satellite telemetry,” said Mile Deliman, senior member of the technical staff at Wind River.
Bild: IntelFreePress