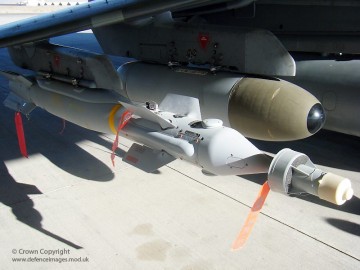 A Paveway IV laser guided bomb is pictured beneath a Harrier GR9 from IV Squadron, RAF Cottesmore whilst in Helmand, Afghanistan. 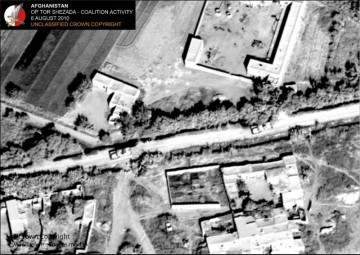 Imagery taken by a Raptor reconnaisance pod attached to a GR4 Tornado aircraft during operations in Afghanistan, showing coalition vehicles manoeuvring. Reconnaissance Airborne Pod for Tornado, RAPTOR, which is built by BF Goodrich Aerospace, is a new stand-off electro-optical and infrared (IR), long-range oblique-photography pod fitted to the Tornado GR4. The images received by the pod can be transmitted via a real-time data-link system to image analysts at a ground station, or can be displayed in the cockpit during flight. The imagery can also be recorded for post-flight analysis. The RAPTOR system can create images of hundreds of separate targets in one sortie; it is capable of autonomous operation against preplanned targets, or it can be re-tasked manually for targets of opportunity or to select a different route to the target. The stand-off range of the sensors allows the aircraft to remain outside heavily-defended areas, to minimise the aircraft’s exposure to enemy air-defence systems. 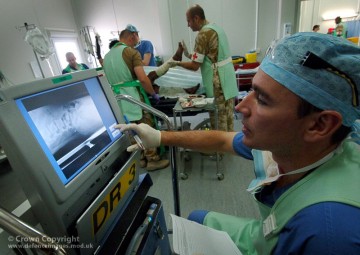 A medic checks an x-ray image of a gunshot wound victim at the field hospital at Camp Bastion, Afghanistan.The Medical Treatment Facility (MTF), which is housed in one of the few solid buildings at Bastion replaces the tented field hospital that has been used since 2003. The temperature-controlled building allows the medics to better avoid the heat, cold or dust that come with the Helmand territory.With a fully equipped operating theatre supporting two operating tables, the MTF also supports up to six beds for the most critically injured in an Intensive Treatment Unit (ITU). Two general wards handle patients with recovery needs and there are an additional two separate, private rooms, supplying a total capacity of 37 beds, with room for expansion.Photographer: Cpl Ian Houlding
Bild: Defence Images