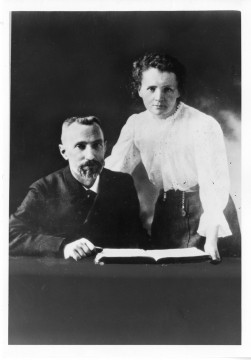 Pierre Curie (1859-1906) and Marie Sklodowska Curie (1867-1934) were jointly awarded the Nobel Prize for Physics in 1903 for discovery of the radioactive elements polonium and radium. Even today, the Curies provide inspiration for popular culture and textbook discussions of science. This photograph was circulated during the 1960s as publicity for an educational television program about the discovery of radium 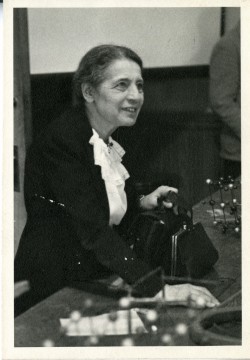 In 1938, Austrian-born physicist Lise Meitner (1878-1968) fled Germany and eventually became a Swedish citizen. After World War II, Meitner received many awards, including being named "Woman of the Year" at the National Press Club in 1946. She was a Visiting Professor of Physics at Catholic University during Spring 1946. In a press release associated with her arrival, Dr. Meitner emphasized that her goal was "wholly educational": "I have no intention to suggest how atomic energy should be controlled, beyond expressing my sincere hope that no occasion will again arise where it will be utilized in war. A lasting peace is more desirable than the creation of weapons which might lead to the extermination of mankind." 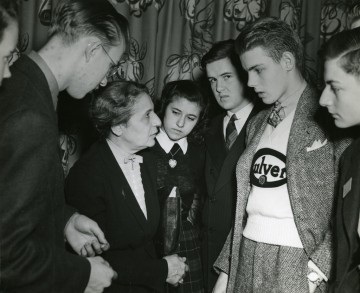 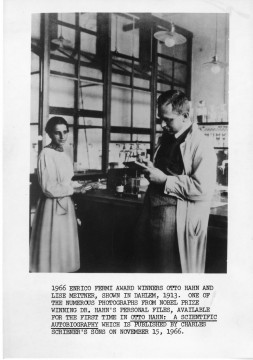 This photograph of physicist Lise Meitner (1878-1968) and radiochemist Otto Hahn (1879-1968) in their German laboratory was circulated in 1966 as publicity for the U.S. translation of Hahn's autobiography, Otto Hahn: A Scientific Biography. Although her work was ignored by the Nobel Committee when they awarded the prize to Hahn in 1944, Meitner received many recognitions of her importance to twentieth-century physics, including being the first woman to receive the prestigious Enrico Fermi Award. 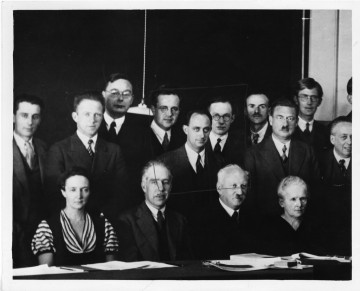