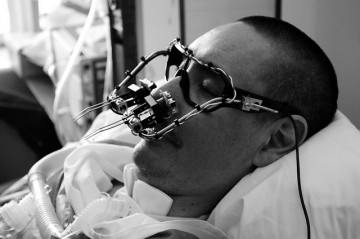 Inspired by the life of Tony Quan (US), a graffiti artist who was diagnosed with the degenerative nerve disorder ALS in 2003, Zach Lieberman (US), James Powderly (US), Evan Roth (US), Chris Sugure (US) and Theo Watson (UK) developed "EyeWriter”. A reasonably-priced eye tracking system and the software that runs it make it possible to draw on a computer screen just by moving ones eyes. This gives people who have contracted a neuromuscular disease—some of whom are completely paralyzed—a way to express their creativity in spite of their condition. credit: Lieberman / Powderly / Quan / Roth / Sugrue / Watson

Impression from the RoboLab 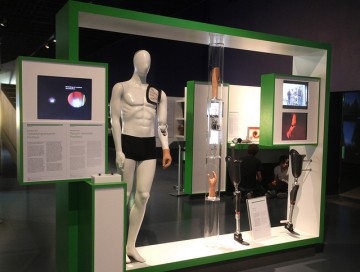 Photo showing an impression from the RoboLab. credit: rubra

A conventional prosthetic arm allows three motions: open/close the hand, rotate the hand inward/outward, and bend/stretch the elbow. The movements can only be performed one-after-the-other. They have to be laboriously initiated and consciously carried out in what turns out to be quite a strength-sapping procedure that doesn’t even result in precise, fluid movements. Intelligent prosthetic devices by "Otto Bock" feature major improvements: they can directly implement mental commands, and the joints can also be moved simultaneously. The prosthesis is controlled by the nerves that were originally responsible for moving the arm. Plus, instead of just three joints, seven active joints are available, which expands the user’s potential range of motions. Thought-controlled prosthesis: By Otto Bock, Vienna General Hospital, Medical University of Vienna. credit: rubra
Bild: Ars Electronica